‘A world with no ice': Confronting the horrors of climate change | Big Think

In this video, 9 experts (including professors, astronomers, authors, and historians) explain what climate change looks like, how humans have already and are continuing to contribute to it, how and why it has become politicized, and what needs to happen moving forward for real progress to be made.

David Wallace-Wells, journalist and New America Foundation National Fellow, says that the main goal of climate action is not to win over the skeptical minority, but to "make those people who are concerned but still fundamentally complacent about the issue to be really engaged in a way that they prioritize climate change in their politics and their voting and make sure that our leaders think of climate change as a first-order political priority."

GINA MCCARTHY: Climate is always portrayed on newscasts as being some kind of big debate. You know, the big debate among the scientists is that 97 percent of them know it's happening and are really worried about it. Three percent are skeptical. That's not a balance. That's an overwhelming majority and that needs to drive the decision, especially in a democracy.

PHILIP KITCHER: Climate science is built on views about the atmosphere that have been developed very successfully and in a very rigorous way from the nineteenth century to the present. There isn't any doubt about the mechanisms of the greenhouse effect. There isn't really any doubt about the evidence behind the consensus that says we have contributed enormously to the warming effects that are now becoming apparent not only in the present but also from the record of the earth's average temperature.

NYE: You can look at the graphs. You can study the stuff for yourself. If nothing else do this. Wherever you live, get access to the coldest temperature of each year for the last century. And unless you live in just very few places you will see the coldest temperature where you live has steadily increased. They'll be some dips. There'll be some ups, but overall you'll find it – and that's just one that almost everybody who has internet access can get those data, they're available. And just look at that one thing and you'll see the world's getting warmer everybody.

MICHELLE THALLER: Now the reason our atmosphere is getting warmer and warmer and warmer is because we humans are putting lots of carbon dioxide up into the atmosphere. And this acts as what we call a greenhouse gas. Sunlight can get through the atmosphere, but the carbon dioxide traps it and it can't release itself back into space so it gets warmer and warmer over time. Carbon dioxide doesn't just warm the atmosphere. It also affects our oceans. When ocean water combines with carbon dioxide to create something called carbonic acid and it makes the oceans more and more acidic over time. And this is a really big problem for marine life. There are things like algae. The algae in the oceans are responsible for most of the oxygen that we breathe. And the algae are having trouble forming because of the higher acid levels in the ocean. So even if the one thing you solved was cooling the earth down, if we continue to put more and more carbon dioxide into our atmosphere there will be other serious repercussions. We could end up killing the ocean life system, for example.

NYE: The earth is getting warmer faster than it has ever gotten before and that's the problem. It's not that the world hasn't had more carbon dioxide. It's not that the world hasn't been warmer. The problem is the speed at which things are changing. We are inducing a sixth mass extinction event kind of by accident and we don't want to be the extinctee if I may coin...

Read the full transcript at https://bigthink.com/videos/confronting-the-horrors-of-climate-change

‘A world with no ice': Confronting the horrors of climate change | Big Think 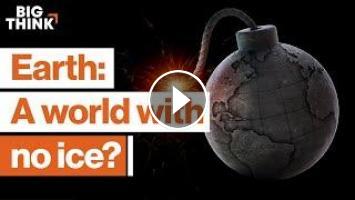 A world with no ice': Confronting the horrors of climate change Watch the newest video from Big Think: https://bigth.ink/NewVideo Learn skills from th...