ava
New Land Rover Defender delivers transformational breadth of capability, using advanced all-terrain technologies to redefine adventure for the 21st century, while remaining true to the pioneering spirit that has been a Land Rover hallmark for more than 70 years.

For 2021 Model Year an advanced new Plug-In Hybrid (PHEV) model – the P400e – is key to Defender’s expanded appeal. Combining a powerful 2.0-litre four-cylinder petrol engine and 105kW electric motor, the 404PS P400e delivers substantial torque alongside low running costs, with CO2 emissions of just 74g/km and combined economy of 85.3mpg (3.3l/100km). It will run in all-electric mode with zero tailpipe emissions for up to 27 miles (43km), including off-road where the immediate torque from the electric motor makes Defender even more capable.

New X-Dynamic specification is available on both Defender 90 and 110, offering a selection of exterior and interior design elements which reflect the 4x4’s immense capability and ensures it stands out from the crowd.

The range of options for personalising Defender has grown too, with new colours including Yulong White, Silicon Silver and Carpathian Grey available in combination with a choice of contrast roof finishes. A selection of individual options are also now available for the first time, including the Folding Fabric Roof for Defender 110 and the choice of a Suspension Pack on Defender 90 while Premium LED headlights, Meridian Sound System, Head-Up Display and Front Fog Lights can all be added individually.

Sitting at the top of the range, the D300 delivers enhanced power and torque, with 300PS and 650Nm of torque, providing a 0-60mph time of 6.3 seconds (0-100km/h in 6.7 seconds) for the Defender 90. The higher torque figure means the Defender D300 provides effortless performance both on and off-road, perfectly fitting Defender’s tough character.

The MHEV technology contributes to enhanced fuel economy through an efficient Stop/Start system which cuts the engine at a standstill, as well as recuperating energy normally lost under braking or decelerating. This energy is then sent back into the battery pack and can be redeployed later. A key benefit of MHEV is that this energy is used when accelerating, delivering faster responses for greater performance.

The new intelligent driveline system continually varies axle torque based on sensor data from the vehicle’s surroundings and driver inputs to distribute all torque to one axle or the other as required. This intelligent torque distribution system optimises the driveline for traction, on-road dynamics and driveline efficiency, resulting in improved fuel economy and reduced CO2 emissions – all without sacrificing any of Defender's inherent off-road capability.

In combination with MHEV technology and the superior refinement of the in-line six-cylinder engine, the diesel Defenders are more economical, more responsive and more refined than the engines they supercede.

The D200 and D240 become D200 and D250 models for 2021, using the same in-line six-cylinder Ingenium engine as the D300 with 200PS and 249PS respectively. An uplift in torque delivers enhanced usability, with 500Nm (D200) and 570Nm (D250) available, utilising MHEV technology to boost fuel efficiency and reduce emissions across the diesel Defender line-up.

The new colours are Yulong White, Silicon Silver, Hakuba Silver and Carpathian Grey, with white or black Contrast Roofs available with all colours. 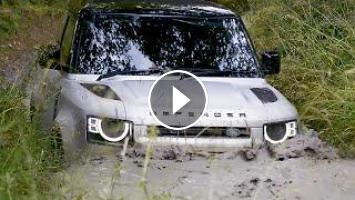