ava
The two new models – the Volkswagen Arteon and Arteon Shooting Brake – are both characterized by athletic lines. However, they differ significantly from each other from the B-pillars to the rear. Whereas on the fastback model, the roof and window contours are swept down in parallel from the B-pillars and therefore become part of the coupé-shaped rear, the roof and window lines are extended towards the rear on the Shooting Brake and end in the new roof spoiler. At the top, the window line runs parallel to the roof. However, at the bottom the lines move upwards towards the D-pillars, thus making the window area at the rear narrower and more striking. All elements together form the sporty rear profile typical for a Shooting Brake.

The 2021 Volkswagen Arteon R will be the flagship in the model series. With this model, Volkswagen is pushing further into the premium performance segment. It is not just the unadulterated output that is fascinating here, but also the way that the vehicles convert their power into propulsion. Thanks to a new progressive technology known as R-Performance Torque Vectoring, the torque is distributed variably both between the axles and also between the rear wheels depending on the driving situation by means of selective wheel torque control. And this creates a new level of driving dynamics in this category. 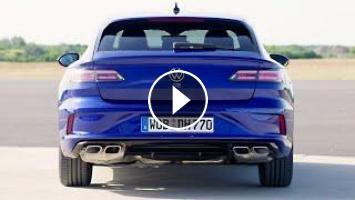 The two new models – the Volkswagen Arteon and Arteon Shooting Brake – are both characterized by athletic lines. However, they differ significantly fr...