Psychologist Daniel Goleman, comedian Pete Holmes, neuroscientist Emeran Mayer, psychiatrist Drew Ramsey, and more outline several of the social, chemical, and neurological factors that may contribute to the complex disorder and explain why there is not a singular solution or universal "cure" that can alleviate the symptoms.

From gaining insight into how the brain-gut connection works and adopting a more Mediterranean diet, to seeking help from medical or spiritual practitioners, depression is a personal battle that requires a personalized strategy to keep it at bay, as well as more research and understanding.

JOHANN HARI: When I feel depressed, like loads of people, I say I feel down, right? And as I was learning about the causes of depression and anxiety for my book, "Lost Connections," I started to realize, I don't think that's a metaphor. There is this amazing Professor at Stanford called Robert Sapolsky who in his early '20s went to live with a troop baboons in Kenya. And it was his job to figure out when are baboons most stressed out. So his job was to hit them with little tranquilizer darts and then take a blood test and measure something called cortisol, which is a hormone that baboons and us release when we're stressed. And baboons live in this hierarchy, so the females don't interestingly but the men live in a very strict hierarchy. So if there's 30 men, number one knows he's above number two, number two knows he's above number three, number 12 knows he's above number 13. And that really determines a lot. It determines who you get to have sex with, it determines what you get to eat, it determines whether you get to sit in the shade or you're pushed out into the heat. Yeah, it's a really, really significant where you are in the hierarchy.

And what Professor Sapolsky found is baboons are most stressed in two situations. One is when their status is insecure. So if you're the top guy and someone's circling which comes for you, you will be massively stressed. And the other situation is when you feel you're at the bottom of a hierarchy, you've been kind of humiliated. And what Professor Sapolsky found is when you feel you've been pushed to the bottom, what you do is you show something called submission gesture. Baboon will put its body down physically or put its head down, it will put its bottom in the air and it will cover its head. So it clearly seems to be communicating, "Just leave me alone, you've beaten me. Okay, you've beaten me." And what lots of scientists, people like Professor Paul Gilbert in Britain and Professor Kate Pickett and Professor Richard Wilkinson also in Britain have really developed is this idea that actually what human depression is in part, not entirely, but in part, is a form of a submission gesture. It's a way of saying, I can't cope with this anymore, right? Particularly people who feel they've been pushed to the bottom of hierarchies or who feel remember the other stressful situations when you feel your status is insecure it's a way of just going, "Okay, can I retreat?" "I don't want this fight anymore." "You've beaten me." It's a kind of very strong evolutionary impulse where you feel you're under attack to just submit in the hope that the stress and anxiety will then go away. The sources of the stress and anxiety will then go away.

And one thing that is so important, Kate Pickett and Richard Wilkinson really developed this, is they've shown so as inequality grows, depression and anxiety grow. They've shown, this is very robust effect, right? This helps us to explain it. One in five Americans will take a psychiatric drug, one in four middle-aged women in the United States is taking a chemical antidepressant in any given year. And I began to think, could it really be that just so many people are just mysteriously lacking a specific chemical in their brain? Why does it seem to be rising so much if that's the cause? If you live in Norway, your status is relatively secure, right? No one's that high, no one's that low, movement between where you are is not so extreme. If you live in the United States, especially today which is we're now at the...

Read the full transcript at https://bigthink.com/Northwell-Health/leadership-influence 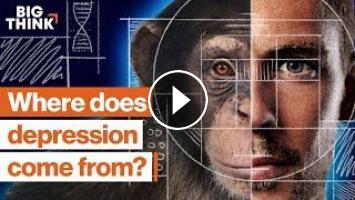