The system is a failure both economically and in terms of the way inmates are treated, with many equating it to legal slavery. American prisons en masse are expensive, brutal, and ineffective, so why aren’t we trying better alternatives? And what exactly are these overstuffed facilities accomplishing?

Prisons in America, specifically, are some of the biggest, most dysfunctional businesses.

For an advanced society, the conditions in our prisons are quite appalling.

And the worst parts to deal with were just the sheer brutality of it.

People who have made mistakes should be deserving of a second chance.

The impact that incarceration has on reducing the crime rate is quite marginal.

There are many better, cost-effective ways to reduce crime, and we haven't done them.

This prison industrial complex is a human rights crisis.

MARIE GOTTSCHALK: The United States is the world's leading warden. It has more people incarcerated in prison and jail, as in absolute numbers, and as a proportion of the population, than any other country in the world. So it incarcerates about 700 per 100,000 people in prison or jail. This is about five to 12 times the rate of other Western countries and Japan. We've got about 160,000 people who are serving life sentences in the United States now, and a number of them who are serving life in prison without the possibility of parole, in some cases, equals the entire prison populations of other large countries.

In my state alone of Pennsylvania, we're spending as much just to send somebody, keep someone in a state prison, as to send them to college, at some of the leading colleges or universities in the state for the year. There's a political issue about the legitimacy of the political system that locks up so many people, and disproportionately locks up so many people of color, and so many people who are poor. So often when we talk about prisons and jails, we talk about the numbers, how many people are in prison, or how many people in jail. What we overlook is that we have some of the most degrading, dehumanizing prisons and jails in any developed country.

DAMIEN ECHOLS: The hardest parts of being in prison, the worst parts to deal with were just the sheer brutality of it. You know, there were times when I was beaten so bad that I started to piss blood. You know, they're not gonna spend a lot of time and money and energy taking care of someone they plan on killing, so it's not like you're gonna see a real doctor... 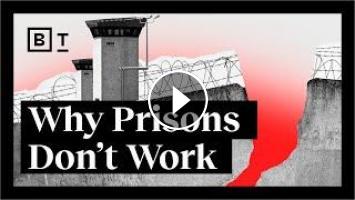 America’s prison catastrophe: Can we undo it? Watch the newest video from Big Think: https://bigth.ink/NewVideo Learn skills from the world's top mind...