Kuay teow kua gai (ก๋วยเตี๋ยวคั่วไก่) is a Thai fried noodle dish, that's one of the least common types available - it's not just available at any Bangkok Street food stall you stumble upon - you have to go to the right places - and I've had quite a few bad versions of the dish as well. Located around the Phlap Plha Chai area of Bangkok, just a short distance from Yaowarat Chinatown, is a little back alley, that's known very well by locals as the spot in Bangkok for kuay teow kua gai (ก๋วยเตี๋ยวคั่วไก่). There are about five different restaurants to choose from, each serves the same dish, with their own unique style and taste.

Probably the most famous Bangkok street food stall serving this dish is a restaurant known as Kuay Teow Kua Gai Nai Hong (ก๋วยเตี๋ยวคั่วไก่นายฮ้ง). This place is located in a serious back alley, and let me tell you, this is some proper street food dining in Bangkok. The cook sits in the middle of the alley, frying up noodles like the master, and tables are set up on both sides of the alley.

But what is kuay teow kua gai (ก๋วยเตี๋ยวคั่วไก่)? It is a Thai fried noodle dish, made from fresh wide rice noodles, the same ones that are used for other Thai street food dishes like pad see ew and pad kee mao. The only other ingredients are chicken, pickled squid, an egg, and a light seasoning of salt and maybe some pepper - and that's really about all that goes into the dish. The reason it's so popular to eat and it tastes so incredibly delicious, is the way that it's made. At this awesome Bangkok street food stall, the chef used charcoal to heat up a wok that was full of oil. She basically waited until the oil was burning, and tossed in the chicken and noodles, and stir fried them in a puff of smoke. The result of cooking on high fire, gave the noodles and other ingredients its incredible char on the outside. The noodles were actually sticky, but at the same time they had the most beautiful crunch to them.

If you love to eat Thai style fried noodles, you're absolutely going to love kuay teow kua gai (ก๋วยเตี๋ยวคั่วไก่). It has such an amazing smoky flavor, and the texture of the ingredients taste so well together. After I finished my first bowl, I decided I wouldn't be satisfied without having another bowl. But just before ordering a second bowl, I noticed on the menu that they had another dish, that was almost the same, except with no noodles and just extra egg. Again she used quite a generous portion of oil, heated it to extreme temperature, fried some chicken, and then poured an egg mixture into the pan. About a minute later, I had the most amazing Bangkok street omelet that I've had a very very long time.

Kuay Teow Kua Gai Nai Hong (ก๋วยเตี๋ยวคั่วไก่นายฮ้ง) is a very local Bangkok style restaurant to eat an authentic version of kuay teow kua gai (ก๋วยเตี๋ยวคั่วไก่). The food is a little on the salty and oily side, but wow is it extraordinarily tasty.

Get my free street food guide:
My premium food guides:
Follow my adventures on &
Thank you so much for watching this food and travel video by Mark Wiens. Don't forget to subscribe so you don't miss my next tasty adventure. You can subscribe right here: 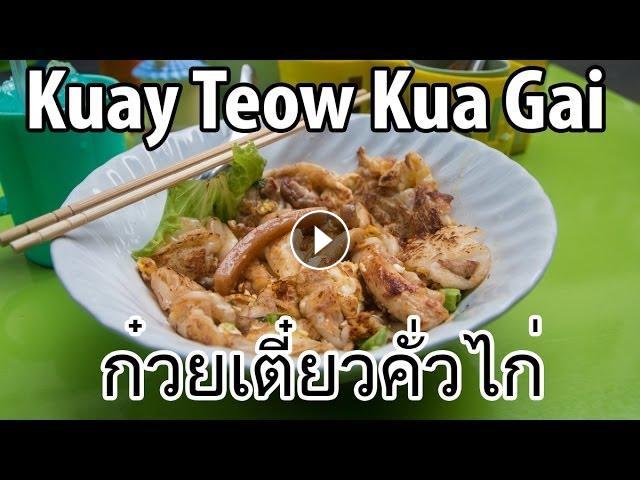