ava
Advanced RV, based in Cleveland, Ohio, partners with clients to build custom motorhomes. These van creations, often performed on the Mercedes Sprinter chassis, are a direct reflection of each client’s objectives, ideas, and personalities. Each client gives their motorhome a name, and every aspect of the build is the result of conversations between the client and ARV’s designers and craftspeople.

In April 2020, Advanced RV posted a video on “Gayle”, built on a 144” wheelbase, 4x4 Sprinter 2500 and the result of a client’s vision for extended off-grid living in remote environments. Foreseeing himself wandering around deserts and open plains for weeks at a time, the client emphasized simplicity, reliability, and ease of maintenance.

This objective led to the decision to build on a 4x4 2500 chassis - lighter than the 3500 and more adept at navigating sand dunes and other off-road obstacles.

The 2500’s Gross Vehicle Weight Rating of 9,050 lbs (almost 2,000lbs less than the 3500) meant that weight needed to be conserved as part of every design decision. Instead of cabinets with doors, storage is achieved with open-concept cubbies. Instead of an air conditioner, the client circulates air with two MaxxFans. He improved insulation by eliminating rear windows. Instead of a toilet plumbed to a black tank, Gayle is equipped with a composting toilet.

Gayle’s off-grid power is supplied by a six-module, 828 amp-hour lithium battery system, including a 3000-watt inverter. The batteries are charged by an engine-driven second alternator, or by portable solar panels that plug directly into the coach’s power grid. The alternator generates power any time the Sprinter engine is running - during travel or when the coach management software activates an automatic regeneration protocol.

In addition to living off-grid, Gayle is designed to operate in all four seasons. The 36-gallon freshwater tank and large gray water tank are both insulated and heated. An onboard diesel-fired furnace heats a glycol loop that circles the coach, providing heat to the living space, generating hot water and keeping tanks from freezing.

The client wanted the ability to manually operate key features of his van. Instead of an electrically leveled chassis or bed, for instance, his mattress platform can be leveled for sleeping using three hand cranks. Similarly, an on board air compressor with hose access at each wheel enables him to quickly inflate his tires after deflating them for sand exploration.

These features don’t make Gayle any more unique than Advanced RV’s other builds, but they do make it, like all of ARV’s projects, the collaborative manifestation of an individual’s personality and vision. 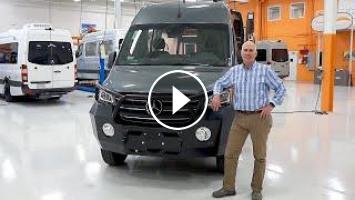 Advanced RV, based in Cleveland, Ohio, partners with clients to build custom motorhomes. These van creations, often performed on the Mercedes Sprinter...