Personal finance: How to save, spend, and think rationally about money | Big Think

It all starts with education and understanding. The more you know about how money works, the better you will be at avoiding mistakes and the easier it will be to take control of your financial circumstances.

VICKI ROBIN: I was leading a session on a relationship with money. I just was curious about where people were with this at this point. This was in 2016. We had 50 people in the room. We circled up and we went around the room, just say something about your relationship with money. And I realized every person in that room was in fear about money. From the 80 year old who I know has millions of dollars to the 20 year old who's like already $20,000 in debt. And it just, honestly it infuriated me like what kind of society requires that everybody participate in something that terrifies them. This feels so amiss to me.

DANIEL KAHNEMAN: People are not fully rational and they make many choices that if they reflected upon them they would do differently. There's no question about that. The major tendency is people tend to frame things very narrowly. They take a narrow view of decision making. They look at the problem at hand and they deal with it as if it were the only problem. Very frequently it's a better idea to look at problems as they will recur throughout your life and then you look at the policy that you're to adopt for a class of problems. Difficult to do would be a better thing. People frame things narrowly in the sense, for example, that they will save and borrow at the same time instead of somehow treating their whole portfolio of assets as one thing. If people were able to take a broader view they would in general make better decisions. So that is certainly one of the weaknesses of human decision making. We call it narrow framing.

ROBIN: First of all, I'd like to distinguish between independence and freedom. So, financial freedom is like freeing your mind. Financial freedom is understanding that I'm me and there's an economy out there and I have a relationship with it but it doesn't run my life. It's freeing my mind from the messages of the consumer culture, the messages of the economy. The messages that a house is a starter house. No, that's my house. I could die in my house. It's like there's so many presumptions that drive us into waste slavery, debt, and it doesn't matter whether you are at the low end or the high end. If you are engaged in that sort of anxious process of more, more, more, you are not free.

So the first layer of financial independence I talk about is this freedom of the mind. This freeing your mind. Of saying like I am sovereign. The economy is secondary. I will move my sovereign self into the economy for my own purposes rather than I am a schlump, the economy is my mega-boss and I don't know, my boss seems to be as big as the sky and so I will just let my life be run by my boss and the tax system and I'm just going to let myself be run by this thing. No. So you are sovereign beings so that's your first layer of financial independence is your own sovereignty. And then the second layer is to get out of debt. And for some people debt feels endless. And the first step to getting out of debt is stop going into debt. There's many people who have written to us who flatten their debt in a couple of years. Impossible debt. Debt that was going to be endless. They would die with this debt. And once they see what the debt is doing to them in terms of the actual opportunities, the future opportunities of their lives, that's the sort of link that we try to get people to make so that something in the future is more important than the immediate pleasure of buying one more tchotchke that you're never going to use...

Read the full transcript at https://bigthink.com/videos/personal-finance-how-to-save

Personal finance: How to save, spend, and think rationally about money | Big Think 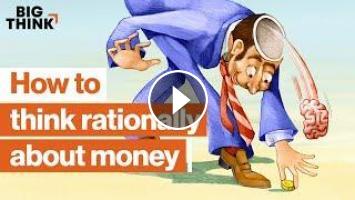 Personal finance: How to save, spend, and think rationally about money | Big Think Watch the newest video from Big Think: https://bigth.ink/NewVideo L...