Should you "hack" your sleep pattern? | Vanessa Hill | Big Think

A seemingly common trait of geniuses like Nikola Tesla and Leonardo da Vinci is that they operated (and excelled) on very few hours of sleep per night. BrainCraft's Vanessa Hill explains that while unorthodox sleep patterns may have worked for them, your mileage may vary. Attempting to sleep like a genius could "wreak havoc" on your brain and be detrimental to your health.

Switching sleep patterns can disrupt these stages, as can consuming alcohol. So while attempting to maximize your creative time, you may be denying your brain and body the time it needs to recover, which can be dangerous.

VANESSA HILL: Sleep is essential for our bodily functions, for our learning and memory, to keep our brain and body healthy. So, that is one reason to remember that sleep is super important. We have been doing it since the dawn of time. So there are different types of sleep patterns and what you normally engage in every single night is called monophasic sleep. That's when you just sleep in one chunk whether it be six hours or eight hours. I hope that you are sleeping more than seven hours a night because that's the scientific recommendation. That's called monophasic sleep. But, we haven't always been this way. There is some evidence to suggest that people in pre-industrialized societies used to sleep in what's called biphasic sleep patterns, which is when they have two chunks of sleep over a 24 hour period. And there's also something called polyphasic sleep which is a pattern where you sleep in three or more phases over the course of a 24 hour period.

So you do vary in this pattern throughout your life. Newborn babies, for example, are great polyphasic sleepers. They sleep for two hours and then awake for an hour and then asleep for two hours. They're asleep most of the time except it's in three or more periods over a 24 hour cycle and then that kind of changes into a monophasic sleep by the time they're five or six years old and they stop napping during the day. Sometimes when elderly people can't sleep in one chunk they do engage in a biphasic sleep pattern where you have two sleeps throughout the day.

For you when you fall asleep it seems like you're unconscious. You don't really know what's going on but there is a lot that is happening in your brain. So, there's four different stages of sleep. Two are light sleep and then there's deep sleep and REM sleep. You cycle through these different stages roughly every 90 minutes on average over the night, but your sleep cycle can vary from 60 minutes to 120 minutes depending on the person. When you fall asleep you cycle through these two stages of light sleep, then deep sleep and REM sleep and over the course of the night you'll go through a number of these sleep cycles. Now, something that is really interesting is people sometimes think that you're getting the same amount of sleep when you're in each of these different stages of sleep, but you actually get more deep sleep in the first half of the night and then more REM sleep in the second half of the night. You do change how much time you're spending in these different sleep stages over the course of the night.

It's natural for us to vary in these patterns across the course of the lifespan but monophasic sleep is the most beneficial for adults where you're sleeping in one chunk throughout the night. That way you can progress the most naturally through all of your sleep stages and spend the best amount of time for your body...

Read the full transcript at https://bigthink.com/videos/hacking-sleep-pattern

Should you "hack" your sleep pattern? | Vanessa Hill | Big Think 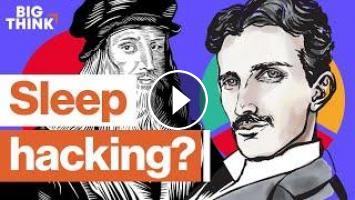