The term luddite, which has now come to mean “people who have [an] ideological opposition to technology,” started with textiles. The original Luddites of the 19th century were weavers who rioted when they began losing their jobs to power looms.

Virginia Postrel is an author and speaker whose work spans a broad range of topics, from social science to fashion, concentrating on the intersection of culture, commerce, and technology. Postrel has also been a columnist for The Wall Street Journal, The Atlantic, The New York Times, and Forbes and its companion technology magazine, Forbes ASAP. Her latest book, The Fabric of Civilization: How Textiles Made the World, examines the development of technology, industry, and commerce through the history of textiles, from prehistoric times to the near future.

VIRGINIA POSTREL: I think we take for granted just how much human intelligence there is in every piece of cloth. From the moment you're born, you're surrounded by cloth. Clothes, medical bandages, tents and backpacks, tape—The pursuit of textiles has led to all kinds of innovation. The machines that launched the Industrial Revolution were machines that mechanized the spinning of thread. And no matter how far back you go, human beings seem to have used cloth, not just for purely functional reasons. Human beings want identity, they want status, they want beauty. It's this long heritage of human beings using their brains and their hands to create a better life.

If I say I wrote a book on textiles, chances are you think I wrote a book on clothes. Whereas, in fact, it's really about my interest in history and technology. Let's start with human languages. Technology, textile, and text all come from the same Indo-European root, and it's associated with the goddess, Athena. There was this very tight connection in ancient Greece between the notion of weaving and the notion of what we would call technology. Following comment threads or taking a shuttle, which is a device that moves thread across the loom. We use this word heirloom to mean something valuable that's passed down in families, but it actually started as heir loom, that is, the valuable thing that was passed down in the family was a loom because you can weave on it not only to make cloth for your family, but potentially, to sell.

The 1750s in England, there were about 4 million people in the workforce, and about one and a half million of them were women spinning. They spin, spin, spin, spin, and there's never enough thread. Take a bandana, which is really small, 22 inches squared. It takes a mile and a half of thread. So you can imagine making a sail or suit of clothes. It took forever. The Industrial Revolution changed that. Suddenly, you break that bottleneck. That has enormous ramifications. It's not just that suddenly people can have more and better and cheaper clothes. That's true. It's also a lot things that are used in business. Sails, sacks for carrying flour, straps for tying things. And so, there's a big demand for weavers. And then the Luddites are in the early 19th century, between 25 and 50 years later. Luddite today has come to mean people who have a kind of ideological opposition to technology, but the original Luddites were weavers. They were losing their jobs to power looms, and they're upset. It's not about technology versus the simple life. It's about I can't feed my kids. And so they go in and they smash the new looms, they riot. The irony of the story of the Luddites is that the reason that their weaving jobs were so good was that an earlier technological innovation and disruption had succeeded. They had great jobs because they had this... 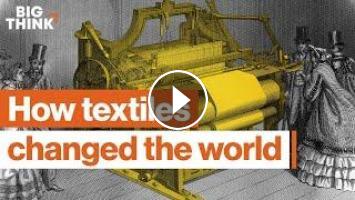