94 Views
admin
The Mercedes-Benz Future Bus with CityPilot further enhances the attractiveness of the city bus as a means of transport. This above all applies to passengers, but also to drivers and bus operators. All three groups benefit from a revolutionary design and trailblazing technology. The bus becomes one with its environment, both in terms of its exterior and interior design and of the technology employed as it moves along its dedicated line and communicates with its surroundings.
The Mercedes-Benz Future Bus with CityPilot is making its first public journey on part of Europe's longest BRT route (BRT = Bus Rapid Transit) in the Netherlands. This links Amsterdam's Schiphol airport with the town of Haarlem. This almost 20 km long route is a real challenge for the Mercedes-Benz Future Bus, as it has numerous bends and passes through tunnels and across junctions with traffic lights.
Ten cameras in different systems with a wide range of purposes, long and short-range radar systems, fusion of the resulting data and reconciliation with stored values, networking with traffic light systems and an automatic braking system – these are the technical requirements of the Mercedes-Benz Future Bus with CityPilot for semi-automated driving on BRT routes. The CityPilot is another milestone reached by Mercedes-Benz on the road to autonomous driving. The CityPilot is based on the Highway Pilot of the Mercedes-Benz Actros, however it exceeds the latter's capabilities to meet the needs of its specific area of operation: new functions include traffic light recognition, pedestrian recognition, centimetric precision when halting at bus stops and the ability to drive semi-autonomously in tunnels. In this way the bus becomes one with its environment not only with its design, but also with the technology it uses to move along its line and communicate with its surroundings.
If you love cars you should subscribe now to YouCar the world famous automotive channel:
All the Best 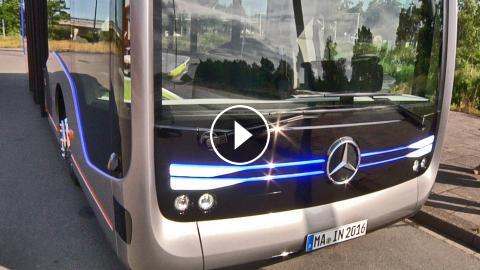 The Mercedes-Benz Future Bus with CityPilot further enhances the attractiveness of the city bus as a means of transport. This above all applies to pas...