Bill Nye, Steven Pinker, Daniel Dennett, Michio Kaku, Robert Sapolsky, and others approach the topic from their unique fields and illustrate how complex and layered the free will debate is.

- Well, you ask one of the deepest philosophical questions of physics. The question of free will.

- For billions of years on this planet, there was life, but no free will. Physics hasn't changed, but now we have free will.

- The brains are automatic, but people are free.

- Our ability to choose is often confused.

- Human choices will not be predictable in any simple way.

- In reality, I don't think there's any free will at all.

DANIEL DENNETT: For billions of years on this planet there was life, but no free will. Physics hasn't changed, but now we have free will. The difference is not in physics. It has to do with, ultimately, with biology. Particularly evolutionary biology. What has happened over those billions of years, is that greater and greater competences have been designed and have evolved. And the competence of a dolphin, or of a chimpanzee, the cognitive competence, the sort of mental competence, is hugely superior to the competence of a lobster, or a starfish. But ours dwarfs the competence of a dolphin or a chimpanzee, perhaps to an even greater extent. And there's an entirely naturalistic story to say, to tell about how we came to have that competence, or those competences. And it's that, "Can do." It's that power that we have which is natural, but it's that power which sets us aside from every other species. And the key to it is that we don't just act for reasons. We represent our reasons to ourselves and to others. The business of asking somebody, "Why did you do that?" And the person being able to answer, it is the key to responsibility. And in fact, the word, "responsibility," sort of wears its meaning on its sleeve. We are responsible because we can respond to challenges to our reasons. Why? Because we don't just act for reasons, we act for reasons that we consciously represent to ourselves. And this is what gives us the power and the obligation to think ahead, to anticipate, to see the consequences of our action. To be able to evaluate those consequences in the light of what other people tell us. To share our wisdom with each other. No other species can do anything like it. And it's because we can share our wisdom that we have a special responsibility.

That's what makes us free in a way that no bird is free, for instance. There's a very sharp limit to the depth that we as conscious agents can probe our own activities. This sort of superficial access that we have to what's going on, that's what consciousness is. Now, when I say, who's this, "we," who's got this access? That's itself part of the illusion because there isn't a, sort of, boss part of the brain that's sitting there with this limited access. That itself is part of the illusion. What it is, is a bunch of different subsystems, which have varying access to varying things and that conspire in a sort of competitive way to execute whatever projects it is that they're, in their, sort of, mindless way executing.

STEVEN PINKER: I don't believe there's such a thing as free will in the sense of a ghost in the machine, a spirit, or soul that somehow reads the TV screen of the senses and pushes buttons and pulls levers of behavior. There's no sense that we can make of that. I think we are...our behavior is the product of physical processes in the brain. On the other hand, when you have a brain that consists of a hundred billion neurons, connected by a hundred trillion synapses, there is a vast amount of complexity. That means that human choices will not be predictable in any simple way from the stimuli that have impinged on it beforehand. We also know that that brain is set up so that there are at least two kinds of behavior. There's what happens when I shine a light in your eye and your iris contracts, or I hit your knee with a hammer and your leg jerks upward. We also know that there's a part of the brain that does things like choose what to have for dinner, whether to order chocolate, or vanilla ice cream. How to move the next chess piece...

Read the full transcript at https://bigthink.com/videos/the-great-free-will-debate 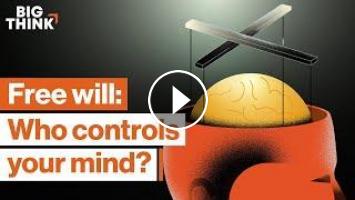