For many, Meaning 1.0 (organized religion) and Meaning 2.0 (modern liberalism) no longer provide the structure and guidance that they used to. "It does feel like the handrails, the things we used to look to for stability and security, have evaporated," says Wheal. "If we've experienced a collapse of meaning, how do we go about restoring it?"

Jamie Wheal is the founder of the Flow Genome Project and an expert in peak performance and leadership, specializing in neuroanthropology. He has advised the U.S. Naval War College and Special Operations Command, Red Bull athletes, and executives of companies including Google and Goldman Sachs. Wheal is the co-author of Stealing Fire: How Silicon Valley, the Navy SEALs, and Maverick Scientists Are Revolutionizing the Way We Live and Work.

JAMIE WHEAL: It's really easy to forget, that we're just monkeys with clothes. If you took all of life on Earth and you compressed it into one 24-hour day, anatomically modern man shows up at four seconds before midnight, cave paintings at one second before midnight. We've been playing at civilization for a fraction of a second.

Everything is going into exponential change, from education to quantum computing, to cryptocurrency, to transport, to macroeconomics, to geopolitics, to climate crisis, to everything. It's breaking our brains. We're overwhelmed, we're collapsing in grief. It does feel that the handrails, the things that we used to look to for stability and security, have just evaporated. If we've experienced a collapse in meaning how do we go about restoring it?

I'm Jamie Wheal, founder of the Flow Genome Project, and author of "Recapture the Rapture: Rethinking God, Sex, and Death in a World That's Lost Its Mind." The collapse in meaning, that I think you can at least argue we're in the midst of right now, is complex and multivariable. We've had a collapse in traditional organized religion, what you could call kind of Meaning 1.0. For the first time ever, the nuns, the spiritual but not religious, like the "none of the above's," is the largest and fastest growing religious movement in North America. There are increasingly folks that feel like, "Hey, those stories, those codes, those ways of being, don't match my identity. Don't match my choices. Don't match my community." So organized religion is no longer a place to hang our hats. And at the same time, modern liberalism has also been getting a little creaky. That's Meaning 2.0. Think of the ivory tower in academia, news media, businesses, and corporate titans and leadership, potentially even medicine. And you just take those and you just go one by one. You're like, oh, well, Goldman Sachs sold middle America down the river in 2008. And McKinsey helped Purdue Pharma sell more OxyContin well after the negative effects were demonstrated. The New York Times and The Wall Street Journal, which used to be considered the journals of record are now imploding. And the same thing with doctors, the same thing with corruptions in peer review, and the replication crisis. Basically everything you've ever seen on a TED Talk is probably not true.

So all of the places that we used to use rules of thumb or decision-making shortcuts, that's just evaporated. So in that collapse, we're getting fundamentalism on one side, and we're getting nihilism on the other. We're getting diseases of despair. We're getting real heartbreak. I think you could make a case that that is why we're seeing this uptick in conspiracy theories of all stripes. Will anybody make sense of all of this nonsense for me? If you can give me a happily ever after, if you can tell me that I'm one of the good guys, and you promised to get me to the other side... 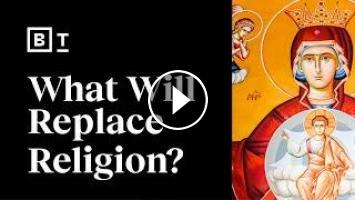 Why the world is going crazy—and how to win back our minds Watch the newest video from Big Think: https://bigth.ink/NewVideo Learn skills from the wor...