From simple experiments like standing at a seashore or looking through a telescope at other planets, to reading about navigation or viewing photos of Earth taken from space, the scientists share several ways that flat Earthers can see the truth for themselves.

Neil deGrasse Tyson was born and raised in New York City where he was educated in the public schools clear through his graduation from the Bronx High School of Science. Tyson went on to earn his BA in Physics from Harvard and his PhD in Astrophysics from Columbia. He is the first occupant of the Frederick P. Rose Directorship of the Hayden Planetarium. His professional research interests are broad, but include star formation, exploding stars, dwarf galaxies, and the structure of our Milky Way. Tyson obtains his data from the Hubble Space Telescope, as well as from telescopes in California, New Mexico, Arizona, and in the Andes Mountains of Chile.Tyson is the recipient of nine honorary doctorates and the NASA Distinguished Public Service Medal. His contributions to the public appreciation of the cosmos have been recognized by the International Astronomical Union in their official naming of asteroid "13123 Tyson".
----------------------------------------------------------------------------------
BILL NYE:

Bill Nye, scientist, engineer, comedian, author, and inventor, is a man with a mission: to help foster a scientifically literate society, to help people everywhere understand and appreciate the science that makes our world work. Making science entertaining and accessible is something Bill has been doing most of his life.

In Seattle Nye began to combine his love of science with his flair for comedy, when he won the Steve Martin look-alike contest and developed dual careers as an engineer by day and a stand-up comic by night. Nye then quit his day engineering day job and made the transition to a night job as a comedy writer and performer on Seattle’s home-grown ensemble comedy show “Almost Live.” This is where “Bill Nye the Science Guy®” was born. The show appeared before Saturday Night Live and later on Comedy Central, originating at KING-TV, Seattle’s NBC affiliate.

Nye is the host of three currently-running television series. “The 100 Greatest Discoveries” airs on the Science Channel. “The Eyes of Nye” airs on PBS stations across the country.
Bill’s latest project is hosting a show on Planet Green called “Stuff Happens.” It’s about environmentally responsible choices that consumers can make as they go about their day and their shopping. Also, you’ll see Nye in his good-natured rivalry with his neighbor Ed Begley. They compete to see who can save the most energy and produce the smallest carbon footprint. Nye has 4,000 watts of solar power and a solar-boosted hot water system. There’s also the low water use garden and underground watering system. It’s fun for him; he’s an engineer with an energy conservation hobby.
----------------------------------------------------------------------------------
MICHELLE THALLER:

Dr. Michelle Thaller is an astronomer who studies binary stars and the life cycles of stars. She is Assistant Director of Science Communication at NASA. She went to college at Harvard University, completed a post-doctoral research fellowship at the California Institute of Technology (Caltech) in Pasadena, Calif. then started working for the Jet Propulsion Laboratory's (JPL) Spitzer Space Telescope. After a hugely successful mission, she moved on to NASA's Goddard Space Flight Center (GSFC), in the Washington D.C. area. In her off-hours often puts on about 30lbs of Elizabethan garb and performs intricate Renaissance dances. For more information, visit https://solarsystem.nasa.gov/people/1040/michelle-thaller/
----------------------------------------------------------------------------------
TRANSCRIPT:

BILL NYE: Is the earth flat or round? It's round, okay. Now, let's see. How do we go about proving that?

MICHELLE THALLER: That's a hard thing for me to even start talking about because there are so many proofs that the earth is round it's difficult...

Read the full transcript at https://bigthink.com/videos/flat-earth-myth-bust 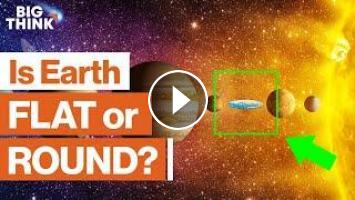