Are geniuses real? The neuroscience and myths of visionaries | Big Think

Tim Sanders, former chief strategy officer at Yahoo, argues that there are three myths getting in the way of innovative ideas and productive collaborations: the myths of the expert, the eureka moment, and the "lone inventor."

-There is no such thing as a lone inventor. We want to be as empowered as Ayn Rand. We want to think that we are the fountainhead, so this is how we tell the story. But until you believe that genius is a team sport, you will never give up control.

- It's not just about collecting a bunch of data and knowing a lot of facts, but it's making these novel connections between ideas.

- I think all of us as humans are sort of endowed with the need to make things better. Genius is just an extreme version of that but it represents us as humans in a very fundamental way.

TIM SANDERS: There are myths of creativity and these myths are usually propagated by people that have romantic notions about heroes, romantic notions about eureka moments. And these myths of creativity keep people from collaborating and it causes them to be a lone wolf. And the research says it causes them to fail. So let me talk a little bit about those myths of creativity. In the world of sales and marketing, I battle against three myths. Myth number one, the lone inventor. This is very dangerous because there is no such thing as a lone inventor. As a matter of fact, there's a lot of historical research that has debunked Einstein. Specifically in terms of inventions, Henry Ford, not a lone inventor. Classic example, Thomas Edison. In the invention community, Thomas Edison is a brand. It stands for 14 people. Yes, there was a figurehead named Thomas Edison. His name is on 10,000 patents. He did not invent a single thing. He marshaled people together and knew how to spot innovations and put people together like, a creative soup, if you will. Here's a classic example, Steve Jobs, you ask the average person, say a millennial who uses a lot of Apple technology, "Who's one of the greatest inventors of our time?" They'll say Steve Jobs. Steve Jobs once said, "I never created anything. "All I did was notice patterns "and put people together to finish projects." So think about it. If he doesn't have Wozniak, there is no original Apple, right? If he doesn't have Ive, there is no iPod. If he doesn't have Tony Fiddel, there is no iPhone. And the list goes on and on.

Got a good friend of mine, David Berkus, who wrote a really wonderful book about the myths of genius. And he was telling me that it's a romantic notion. And I remember when I first read this research years ago, no lone inventor, it did kind of hurt my feelings. I'm a musician in my past. I thought I wrote a lot of songs but according to the research, I'd never wrote a song. I always collaborated with somebody, the song that actually made it to the record and made it on the radio had 15 to 50 hands on it. When I talked to David, I said, "When I read your research, it kind of hurt my feelings." And he goes, "It's a romantic notion because we want to be heroes." We want to be as empowered as Ayn Rand. We want to think that we're the Fountainhead. So this is how we tell the story. But until you believe that genius is a team sport, you will never give up control. And this is the problem for a lot of people in sales. They don't want to cede any level of control over their process to somebody outside of sales world because they don't value those voices enough. But the research is clear on this, Miller Heiman Institute researched the difference between good and great. They call it world-class organizations. They win, they sell 20% more than their nearest competitor. The only thing they have in common is they've broken this myth and they understand that every deal is about rapid problem solving and no one person can solve the problem on their own.

Quickly, the other two myths of creativity that must be dispelled is the eureka moment. There is no such thing as a big idea that changes the world. I know this is another one of those hurtful, but very true based on empirical research...

Are geniuses real? The neuroscience and myths of visionaries | Big Think 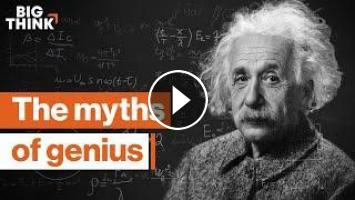 Are geniuses real? The neuroscience and myths of visionaries Watch the newest video from Big Think: https://bigth.ink/NewVideo Learn skills from the w...