While philosopher Slavoj Žižek, comedian Lewis Black, and actor Jeff Garlin acknowledge that some topics can be hurtful or even oppressive and should thus be approached with "good taste and self-restraint," they also argue that PC culture has tipped the scales far beyond being balanced. "If we continue to move in that direction," says Black, "then we're going to be living between uptight and stupid and there'll be no in between."

SLAVOJ ŽIŽEK: I know that there is a lot of sexual harassment, racism, and so on in our lives. And I don't doubt that the majority of people who promote political correctness mean it sincerely. I am not saying that. I am not saying in the way of right-wing paranoia that they are evil people who want to destroy the American way of life. I'm just saying that the way they approach the problem is that instead of resolving it, the predominant effect is just to keep it under check and allowing the true problem—racism, sexism—to survive in a more covered up version and so on and so on. Of course, racist jokes and so on can be extremely oppressive, humiliating, and so on. But the solution, I think, is to create an atmosphere or to practice these jokes in such a way that they really function as that little bit of obscene contact which establishes true proximity between us. And I'm talking from my own past political experience, ex-Yugoslavia. I remember when I was young, when I met with other people from ex-Yugoslav Republic—Serbs, Croat, Bosnians and so on—we were all the time telling dirty jokes about each other, but not so much against the other. We were, in a wonderful way, competing who will be able to tell a nastier joke about ourselves. These were obscene, racist jokes, but their effect was a wonderful sense of shared obscene solidarity. It works.

So you see this ambiguity, that's my problem with political correctness. You know. It's just a form of self-discipline which doesn't really allow you to overcome racism. It's just oppressed, controlled racism.

I am not an idiot. I am well aware this doesn't mean we should just walk around and humiliate each other. It's a great art how to do it. I'm just saying that's my hypothesis. Without such a tiny exchange of friendly obscenities, you don't have real contact with another. It remains this cold respect and so on, you know. We need this, we need this to establish real contact.

LEWIS BLACK: Political correctness has a tendency to jump the gun before you get to bigotry. Political correctness has no sense of humor so it doesn't know. I will mention guns in my act, and not that this is politically correct, it's the same sort of thing. I'll say guns and then you immediately feel the audience get uptight because I've said nothing but 'guns'. They don't know what I'm going to say, they have no idea, they've got no clue and they jump on it. So what happens in a politically incorrect joke is they hear the first part and they stop listening. So they don't know what the god damn joke is about. I have little or no time for it. And if you have trouble with that, what you do is you laugh. If you think a joke was mean or bad or something that was politically incorrect, you still laugh at the joke then you go 'Ha ha' and later on, you go 'That was bad. I was bad to laugh at that.' Do it on your own time.

I would go to a college campus. The last one I went to was Penn State. They had just gone through the year of Sandusky and Paterno, my opening act had even done Sandusky, jokes about him. And we thought, well, we can't do that because these kids have just been, you know, and when you got on stage you realize these kids are shell shocked because they're not even laughing at what they normally would laugh at. Afterward, when we avoided the topic completely, the...

Read the full transcript at https://bigthink.com/videos/political-correctness-debate 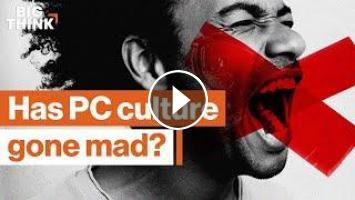 Has political correctness gone too far? Watch the newest video from Big Think: https://bigth.ink/NewVideo Learn skills from the world's top minds at B...