True leaders inspire people to follow and believe in them and the organization's mission by being passionate, having humility, and being a real part of the team. This is especially important in a field like health care, where guidance and teamwork save lives.

Michael J. Dowling is president and chief executive officer of Northwell Health, New York's largest health care provider and private employer, with 23 hospitals, more than 800 outpatient locations, and 75,000+ employees. One of health care's most influential executives, Mr. Dowling has received numerous awards, including the Ellis Island Medal of Honor, an honorary degree from the prestigious Queen's University Belfast and his selection as the Grand Marshal of the 2017 St. Patrick's Day Parade in NYC. He also serves as chair of the Institute for Healthcare Improvement.

MICHAEL DOWLING: Well, leadership, in many ways, is about influence. It's about getting people to believe in what you believe in. I fundamentally believe that people want to follow if they believe. If they feel there's a connection between what you're selling and what they believe in themselves.

And health care, of course, is an extraordinary place for that because what we do all the time is we're trying to keep people well. We're trying to help people that get sick. We're trying to save people, bring families back together, bring children into the world, take care of all the people at the end of life.

My view is the first thing you do to make that happen is you've got to believe it yourself. If you're passionate yourself about what you believe in, it is serious, it's just not a job, it's something that's inherent in you, that this is what you really care for.

It's also about humility. It's also about not taking yourself too seriously, and what I mean by that is, especially if you're a CEO, what is a CEO? You're a part of a team. You're the captain. But you have to be a player. You're not a title. The captain who's on a team that is not a player and nobody respects—the title means nothing.

I know I was fortunate to play sports. Games are won in the locker room, the feeling of camaraderie among players. That feeling is about "I'm for you, you're for me. We go down together, we go up together. We win together, we lose together."

But if I'm the captain, the "CEO" in that locker room, and I consider myself so important, you know, I work and I live in a big office, and my desk is huge and I drive a big car and I live in a nice neighborhood and look where I got my degree from. And I meet people like this, "Oh, look where I got my degree from. I'm top of my class." And quite frankly, I could care less. Are you a team player? Are you respected? Are you appreciated? Can you influence? Will people follow you?

And you gain respect by your authenticity. Don't pretend, be real, you know? Accept your vulnerabilities, accept your weaknesses, know where your strengths are, and get people to belong.

People want to belong to a cause. Engage people, just don't direct them, just don't talk to them. Engage them. It's a participatory process. 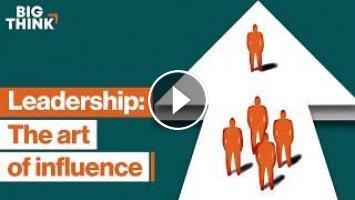 How leaders influence people to believe Watch the newest video from Big Think: https://bigth.ink/NewVideo Learn skills from the world's top minds at B...