Inside the genius of Albert Einstein | Big Think

"Everybody knows who Einstein is and people understand that he was a very famous scientist," says NASA astronomer Michelle Thaller. "But I think that people often don't grasp the true depth and the profound nature of the things that Einstein introduced to us."

MICHELLE THALLER: Albert Einstein was incredibly brilliant and he revolutionized our understanding of the universe.

MICHIO KAKU: People ask the question what has Einstein done for me lately. And the answer is everything. Everything we see around us – the electronics, the satellites, the atom smashers, all of that in some sense could be traced back to the work of Albert Einstein. In fact, many of the crumbs, the crumbs from his table, have gone on to win Nobel prizes for physicists even today.

THALLER: Einstein, right. I just say that word and all of a sudden you're thinking about sort of crazy white hair and a mustache, somebody who is brilliant. Those wonderful knowing eyes with lots of smile lines around them. Everybody knows who Einstein is and people understand that he was a very famous scientist. But I think that people often don't grasp the true depth and the profound nature of the things that Einstein introduced to us.

DAVID BODANIS: His sister thought he was a genius. His father thought he was a genius. But he was stuck in the patent office in Bern, Switzerland and nobody else thought he was a genius at all. He had mouthed off to his professors at university. He didn't get any good job. His department of theoretical physics was the top drawer of his desk and he had slammed it closed. But then, and he had tried all sorts of things. He was about 25-26. He had tried lots of ideas while he was stuck at the patent office. Nothing had really come together and then suddenly in the spring of 1905, it was like a storm burst in his head. He poured out one paper after another. About four of them were worthy of the Nobel prize and the final two were special relativity and E = mc2.

FREEMAN DYSON: He had just this wonderful gift of talking to the public and in addition, of course, he had a turbulent family life and he was in many ways a selfish and unpleasant character. But on the other hand, he was wonderful with children and so on. I mean there were all sorts of – he had wonderful qualities. And those things I think the public rightly appreciated.

BODANIS: Einstein once said he wasn't smarter than other people, but he said I have the persistence of a mule. And he was really honest about it. When he was a little kid he'd make card castles. He'd make layer after layer after layer of card castles and if they blew down well, he'd take a deep breath and build it up again. All through his early 20s he was happily married at the beginning to a really hot young Serbian physician student. The only woman in his class at the Polytechnic Conservatory. And they had great dreams of maybe becoming professors together. But reality got in the way. He was stuck at the patent office and until 1905 when he was 25-26 he couldn't get any fresh ideas. And he and his wife they began slowly to drift apart. They didn't have money for childcare. She was stuck at home taking care of the kids. She couldn't really participate in his work.

THALLER: Einstein was a professor. He actually taught a lot at the University of Bern and also in Berlin and then eventually came to Princeton. He was very much a product of the time and the science that was going on. There were brilliant people at this time. Science was changing in so many different ways, and for a lot of things Einstein found himself in the right place at the right time to see two different things going on and say aha, those things actually go together. And to me that really was some of the real brilliance of Einstein was that he became a bridge between many, many different subject matters...

Read the full transcript at https://bigthink.com/videos/inside-the-genius-of-albert-einstein

Inside the genius of Albert Einstein | Big Think 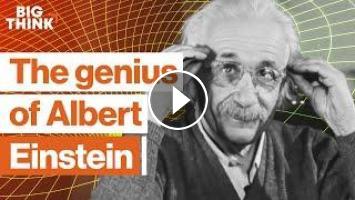 Inside the genius of Albert Einstein Watch the newest video from Big Think: https://bigth.ink/NewVideo Learn skills from the world's top minds at Big ...