As an existing technology, there is a lot that virtual reality can do: rich and immersive environments, heightened storytelling, emotionally resonant experiences, and increased productivity in retail. But it's only in its infancy.

"PETER DIAMANDIS: Every year I spend time thinking about what are the technologies going from deceptive to disruptive this year that today's exponential leaders need to be thinking about and actually beginning to work with. And for this coming year, for the next few years my view is that virtual reality is part of that. And it's gotten different terms and there are different elements of it, virtual world, virtual reality, augmented reality. And really the kickoff was the purchase of Oculus Rift by Facebook for a couple of billion dollars. But in addition to that what we've seen is a number of technologies coming together – infinite computing, very cheap high resolution cameras, machine learning capabilities, low latency, high bandwidth networks. All of these things are coming together to reinvent the virtual world experience.

JEREMY BAILENSON: If you think about cars. Forty thousand people died in the United States last year driving, 1.3 million worldwide died in car accidents. Think about the productivity lost by sitting in a box for an hour each way to and from work. Think about the fossil fuel that we're burning while we commute back and forth to work. Think about the road rage. Think about the germs that you get on public transportation. I'm not claiming that we should not see people. I love social connection. What I'm saying is that there's a subset of travel that if you think about it, why do we drive all the way to work so we can sit at a desk and pound on a computer? Maybe we only need to go two days to work. And for those meetings that are not essential we need to put those in VR. We cannot support a planet of 11 billion people which we'll be at quite soon with everybody driving and flying everywhere using fossil fuels it's just not going to happen. So, why don't we have networked meetings yet? And the answer is because there's this secret sauce, this social presence that we have face to face that we don't get with video conference yet and VR isn't there yet. So what we need to do is to be able to track more body movements. The bottleneck is actually not bandwidth because avatar-based communication is cheaper from an bandwidth standpoint than video. The reason is if you're doing an avatar-based communication, all the 3D models for the avatars are stored locally on each machine. What travels over the network is the tracking data. So, locally a camera detects that I smiled and then it sends over network a packet that says smile at 22 percent. And then on the other computer it then draws that smile. So you're not sending visual information over the network. What you're sending is very cheap information which is semantic information about movements. The bottleneck is we can't track movements that accurately so if you think of the commercial systems right now they track what we call 18 degrees of freedom. Your head and both hands. You can do rotation which has three and X, Y and Z which is obviously three. And so you've got 18 points, two hands and a head. In order to have the conversation flow we need to have subtle cheek movements and the twitch of my elbow, everything I do communicates meaning whether I'm doing it intentionally or not.

DIAMANDIS: Imagine a virtual reality experience where when you go into such a reality world everything looks like it's real and you can navigate around it and begin to do extraordinary things in this high fidelity world. At home you will have yourself 3D scanned down to the millimeter. I then enter into a virtual world and I have an AI there that is my shopping advisor. It says Peter...

Read the full transcript at https://bigthink.com/videos/virtual-reality-future 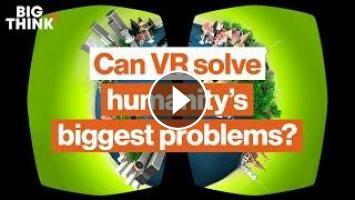 Why virtual reality is necessary on a planet of 11 billion Watch the newest video from Big Think: https://bigth.ink/NewVideo Learn skills from the wor...