The difference between the right and wrong questions is not simply in the level of difficulty. In this video, geobiologist Hope Jahren, journalist Warren Berger, experimental philosopher Jonathon Keats, and investor Tim Ferriss discuss the power of creativity and the merit in asking naive and even "dumb" questions.

WARREN BERGER: The idea that questions are becoming more valuable than answers, it seems kind of counterintuitive, but it's actually an idea that's being really embraced these days in Silicon Valley and other areas and other centers of innovation. And the reason why is if you look at a lot of the innovations and breakthroughs today and you trace them back as I did in my research to their origin, a lot of times what you find at the root of it all is a great question, a beautiful question. A great definition I saw for questioning is that questioning enables us to organize our thinking around what we don't know. So, in a time when so much knowledge is all around us, answers are at our fingertips, we really need great questions in order to be able to know what to do with all that information and find out way to the next answer.

HOPE JAHREN: The real joy for me is that I can take things that are already familiar to you and by sharing the story of how I've learned to look at them you can see those things you've been seeing a little differently. So I talk about curiosity driven research as questions that we try to answer. why is that tree growing successfully in that place, but never in that place? That's a curiosity question. It's the kind of question a little kid could come up with. Why don't we have those trees at our house? Now, buried in the answer might be something that could give us better fruit someday that we can sell in the marketplace and feed hungry people with. But that result, that application to growing food for people is buried several steps below that answer. My part of that is to look at that first answer. What is that tree? What does it do? Why is it there? And we call that the curiosity driven piece because that answer will be basically turned over to other experts who know how that might play out into something that is important for the marketplace. But there's no substitute for that first step, for that little kid question.

BERGER: The research. A four-year-old girl is asking as much as 300 questions a day and when kids go into school you see this steady decline that happens as they go through the grade levels to the point where questioning in schools by junior high school is almost at zero. There are a lot of reasons why questioning declines as we get older, but one of the key issues is that in schools we really value the answers and there is almost no value placed on asking a good question. In fact, the teachers now are so stressed to teach to the test and to cover so much material that they really can't even entertain a lot of questions even if they want to. So it becomes a real problem in our school system, in our education system. I think people are starting to address it, try to deal with it. In my research I found a number of teachers, schools that are trying to place more emphasis on questioning.

JONATHON KEATS: I often start any project by asking a naïve question. So naïve that most likely you ask these sorts of questions when you were a child, but at a certain age you learn that these were not appropriate. Or even if you ask them to yourself you never really followed through to try to see what would happen if you were to do something that was kind of patently absurd. But we can still for our own sake, the back of our mind, ask those sorts of questions and let them play out. We can fully develop them and even if it's only in our own mind that we are fully developing them that process can take us to something that is more concrete, something that is more actionable in an adult responsible world that we don't really need to say we came to it through that naïve question...

Read the full transcript at https://bigthink.com/videos/how-to-ask-better-questions 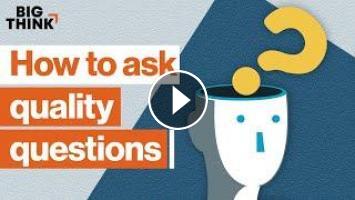 The art of asking the right questions Watch the newest video from Big Think: https://bigth.ink/NewVideo Learn skills from the world's top minds at Big...