78 Views
admin
Rossi Ralenkotter, President/CEO of the Las Vegas Convention and Visitors Authority talks about the announcement of the first direct flight from Beijing to Las Vegas starting in December. The flight will come from Hainan Airlines and is the product of many years of work by the LVCVA and McCarran International Airport.

Chinese tourists are one of the fastest-growing and largest-spending groups of international visitors to Las Vegas. With the reciprocal 10-year tourist visas and the introduction of hotels, programming and amenities geared toward Chinese visitors, Las Vegas has established itself as a major draw for Chinese traveling to the United States. “With the expansion of tourist activity between China and Las Vegas, Hainan is proud to provide the very first nonstop service to this exciting market,” said Mr. Hou Wei, vice president of Hainan. “Hainan’s award-winning service and elite experience complement the dynamism and vibrancy of Las Vegas. This is a further reflection of our long-term commitment to our customers in China and the U.S.” added Mr. Hou. The new route is part of Hainan’s large-scale expansion in North America. On the west coast, Hainan already operates nonstop service between Silicon Valley (SJC) and Beijing, Los Angeles (LAX) and Changsha, and from Seattle-Tacoma International Airport to Beijing and Shanghai. This complements the airline’s nonstop routes between Beijing and Chicago, Boston, Calgary and Toronto, and between Shanghai and Boston. “Nonstop international service is increasingly important at McCarran International Airport, and China has long been among our most sought-after markets,” said Clark County Aviation Director Rosemary Vassiliadis, who oversees operations at the eighth-busiest airport in the United States. “We are grateful for our new partnership with Hainan Airlines, and look forward to welcoming its world-class service to our state-of-the-art airport here in Las Vegas.”

Hainan flight 7970 will depart Las Vegas McCarran International Airport at 12:30 p.m. and arrive Beijing’s Capital Airport at 5:30 p.m. the subsequent day, allowing for connections to other points in China. Flight 7969 will depart Beijing at 2:20pm and arrive Las Vegas at 10:30am the same day. Las Vegas times are one hour later during the summer season. Nonstop flight time is approximately 13 hours westbound and 12 hours eastbound. “We are extremely proud to welcome Hainan Airlines to Las Vegas with their convenient, premium-service for Chinese visitors,” said Rossi Ralenkotter, president/CEO of the Las Vegas Convention and Visitors Authority (LVCVA.) “China is an area where we have seen steady growth in visitation and we will continue to focus on experiences and amenities that cater to our Chinese guests. With these first-ever flights from China to Las Vegas, we are anticipating more than $33.5 million in annual economic impact.” The new nonstop service will be flown by Boeing 787 Dreamliners with 34 business class lie-flat seats and 177 economy class seats. Hainan is the airline with the most nonstop 787 Dreamliner routes between China and North America.

The announcement comes on the heels of another momentous milestone for Hainan Airlines. On 30th June 2016, Hainan announced a new collaboration with DreamWorks Animation to feature the “Kung Fu Panda” film franchise on Hainan’s award-winning fleet. Up to six specially designed “Kung Fu Panda”-themed liveries will showcase characters and scenes from the blockbuster film franchise on Hainan’s new 787-9 Dreamliners. Hainan Airlines is Mainland China’s largest independent airline, and is the only Mainland Chinese airline with a perfect five-star rating from Skytrax, the international airline ratings agency, six years in a row. Members of Alaska Airlines’ Mileage Plan may earn or redeem points on Hainan Airlines flights. Members of Hainan’s own frequent flyer program, the Fortune Wings Club, may earn and redeem points for travel worldwide. Business class passengers enjoy priority check-in and luxurious seats that convert to fully-flat beds. Gourmet Chinese and Western cuisine as well as award-winning wines, freshly brewed espresso and high-quality teas are available. Amenity kits feature Bulgari® cosmetics. A state of the art entertainment system offers over 100 movies, audio selections and games on demand. Premium passengers can also reserve complimentary private chauffeured car service between home, the airport and their destination in both the U.S. and China. Once D.O.T. approval is received, Hainan Airlines flights will be available through all travel agents and travel websites, as well as online at www.hainanairlines.com 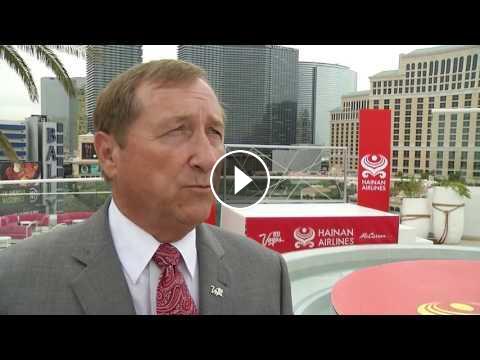 Rossi Ralenkotter, President/CEO of the Las Vegas Convention and Visitors Authority talks about the announcement of the first direct flight from Beiji...